Tired of eating American sausages? and want to spice up your food game? Then you should consider using brats, next time you are thinking to use sausages in your meal. Brats are also known as bratwurst that is one type of german sausage that has become famous for the common substitute as sausage.

More about this german sausage, it mainly made up of veal, beef or pork. The name bratwurst comes from old high german, known as finely chopped meat. This article will provide you details about how long to boil brats? and do you need to boil brats before grilling? In addition, we will give you recipe of beer boiled brats and trust me delicious!

What Is The Reason Behind Boiling Brats?

The most common reason people boil brats is that they want to check if the brats are thoroughly cooked before grilling or before making any delicious german meal.

Do you need to boil brats before grilling?

Many people do think that boiling brats before grilling it is not important. Lastly, it’s all based on your personal choice and convenience. If you are in a hurry then you can directly grill it, if you aren’t then you should consider boiling bratwurst then grill it. You can try both methods to differentiate and examine the flavor and texture of bratwurst. 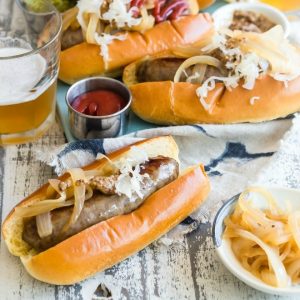 How long to boil brats before grilling?

It would not take more than 15 minutes for bratwursts to boil completely or you can check by the color of german sausages.

Is it normal for brats to float before 20 min of boiling?

Yes, it is perfectly normal as fat separates while boiling bratwurst sausages.

Reasons to boil brats before grilling

The first and foremost reason to parboil bratwurst before grilling is that it gives theses sausages a pleasant flavor as well as prevents them from breaking. But how long do you boil brats in beer? or how long to parboil brats in the water?  To solve the question, we have tried boiling these raw brats in beer as well as water. If you are using beer to parboil these sausages then it would take 10 minutes whereas with the water the bratwurst cooking time would be higher and take more than 15-20 minutes.

Coming to the boiling temperature, It is nearly impossible to overcook these fat sausages but you shouldn’t prick brats with a fork while boiling them. It can ruin the texture and shape of bratwursts, as these sausages would split after boiling.

Find out how much jalapeno burn lasts on hands?

Most people use beer to boil these sausages because:

If you are not happy with using beer while boiling bratwurst then you could use Apple juice, Water, Chicken, or Beef broth.

Recipe Of Boiling Brats With Beer

Cooking and confused how much garlic is a clove? check our linked guide.

We hope this article solves your question about how long to boil brats. And why you should parboil brats with beer before grilling. Do tell us what you have ended up using while boiling bratwurst. Ask questions in the comment section below if you have any.

Scroll back to top